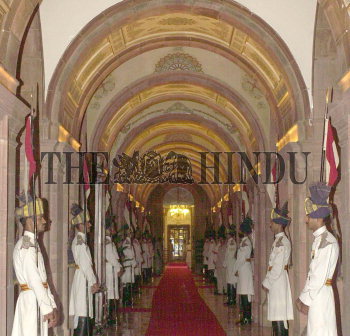 Caption : The bodyguards of President A.P.J. Abdul Kalam (not in picture) are lined up inside the Rashtrapati Bhavan to welcome the King of Bhutan, Jigme Singye Wangchuck (not in picture), during the ceremonial reception which was shifted indoors after a heavy downpour in New Delhi on September 15, 2003. The Bhutanese King accompanied by a high-level delegation that includes the Foreign minister, Lyonpo Khandu Wangchuck, arrived in New Delhi on September 14th, on a five-day visit to India at the invitation of the Indian President. Photo: Rajeev Bhatt.