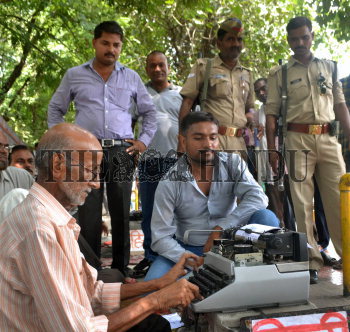 Caption : LUCKNOW, UTTAR PRADESH, 22/09/2015:TYPIST KRISHNA KUMAR GOT SECURITY: 65 years old Hindi typist Krishna kumar whose typewriter was broken to pieces by a police officer who was later suspended, was provided security after the unknown threat call on behalf of said police official in Lucknow on September 22, 2015. Krishna has been working on pavement outside the GPO for last 35 years struggles to earn a bare minimum about 50-100 rupees a day for his family was in for a shock on Saturday, when a sub-inspector, Pradeep Kumar, reportedly asked him to vacate the spot when Krishna protested, the cop abused him and kicked his typewriter until it was broken into pieces in Lucknow. whole episode was captured by a photojournalist, Ashutosh Trpathi working for Dainik Bhaskar Portal, went viral on social media forcing Chief Minister Akhilesh Yadav ordered suspension of sub inspector, announced 1 lakh rupees help and replacing with one new type writer. Photo: Rajeev Bhatt