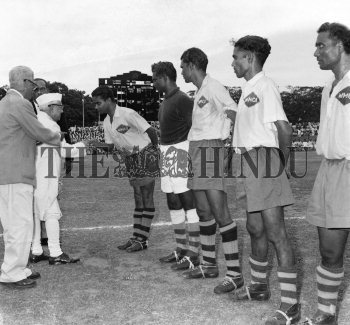 Caption : The Wimco Sports CLUB football TEAM being presented to the MADRAS Governor, Bishnuram Medhi, before the start of the final of the MADRAS Football Association shield tournament between Integral Coach Factory (ICF) and Wimco Sports CLUB on June 24, 1960 at the Corporation Stadium, MADRAS. PHOTO: THE HINDU ARCHIVES