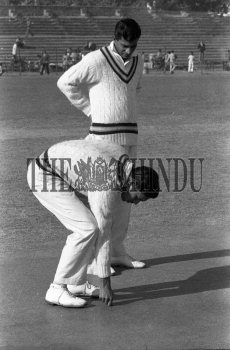 Caption : West Zone captain C.G. Borde picks up the coin after the TOSS as South Zone skipper M.L. Jaisimha looks on, before the start of the four-day Duleepsinhji Trophy cricket tournament final in New Delhi on December 27, 1963. PHOTO: THE HINDU ARCHIVES