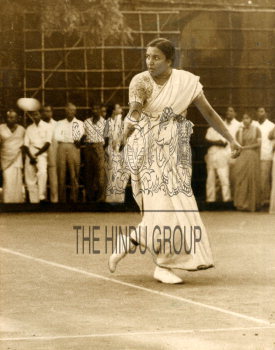 Caption : Photo shows Indira Sambasivam in action against Swete in the women's singles final of the Madras Hard Court Tennis Championships conducted by the Madras Cricket Club (M.C.C.) in Madras on April 02, 1955. PHOTO: THE HINDU ARCHIVES