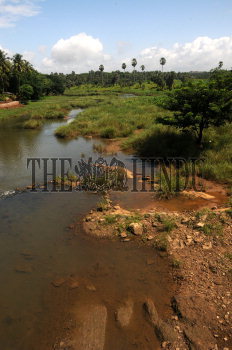 Caption : PALAKKAD, KERALA, 09/08/2015: The once mighty river Gayathripuzha has turned into a trickle despite a relatively better monsoon, in the eastern region of PALAKKAD is one of the main tributaries of the Bharathapuzha the second-longest river in Kerala, It originates from Anaimalai hills, passes through Kollengode, Nenmara, Alathur, Wadakanchery and Pazhayannur before joining the Bharathapuzha at Mayannur. Changes in land use pattern have almost killed this major tributary of Bharathapuzha. A scene from Thrippalur near PALAKKAD on August 09, 2015. Photo: K. K. Mustafah