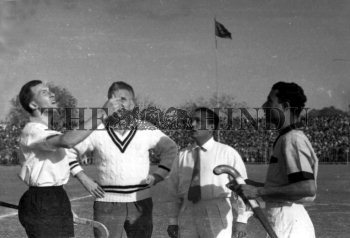 Caption : German captain TOSSes the coin as Indian captain Charanjit Singh looks on during the TOSS before the start of the first hockey Test match between India and Germany in New Delhi on January 23, 1962. PHOTO: THE HINDU ARCHIVES