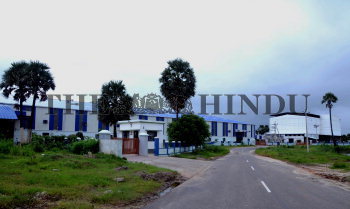 Caption : PALAKKAD, KERALA, 19/07/2015: KINFRA integrated industrial park at Kanjikode near Palakkad. Palakkad district which known earlier for its vast expanses of rice fields is fast turning into Kerala’s most sought after industrial hub if the data available with Industry Department are any indication. As per the latest estimate, as many as 1861 new industrial ventures have started functioning in the district since January this year. The total number of industrial units in the district is estimated at 19,349.According to industry department sources, 6868 employment opportunities were created ever since January in the district as a result of the fast-paced industrialisation drives. While comparing with the rest of districts in Kerala, Palakkad has achieved tremendous progress in industrialisation. Photo: K. K. Mustafah