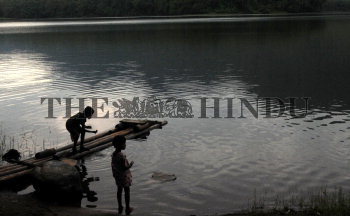 Caption : PALAKKAD, KERALA, 02/06/2015: Children playing on the banks of plentiful Thunakadavu reservoir in Parambikulam Tiger reserve in Palakkad. According to Indian Meteorological Department (IMD), the state received an excess of 28% summer rains from March 1st to May 27th this year. This is the first time in the past four years that Kerala has received excess summer rains between March and May. In 2013, there was a deficiency of summer rains by as much as 42%, while there was a deficiency of 19% in 2012. In 2014, there was deficiency of only 4%. Kerala gets an average of 380 mm of rain in summer and eight districts in the state received excess rains, with Palakkad getting 64% more than its normal summer rainfall. It received 422.5 mm rain compared to its normal of 257.9 mm. Interestingly, Palakkad is the district which records the highest temperatures in summer at 38-40 degrees centigrade. The other districts that got excess summer rains are Idukki, Kasaragod, Kottayam, Malappuram, Pathanamthitta, Thiruvananthapuram and Wayanad. Photo: K. K. Mustafah