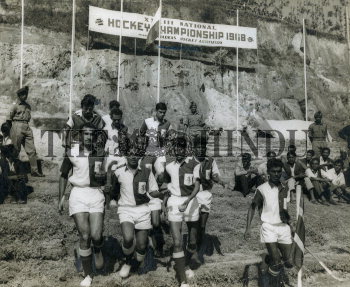 Caption : The Madras players led by Badiuddin (second from left) entering the field for the match against Andhra during the National Hockey Championship for the Rangaswamy Cup at the Habbibullah Stadium, M.R.C. Wellington in Ootacamund on February 02, 1968. (Published in Sport And Pastime on February 24, 1968) PHOTO: THE HINDU ARCHIVES