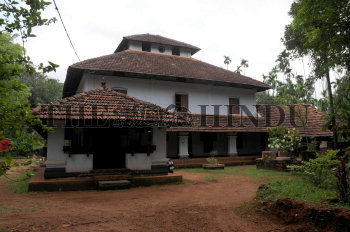 Caption : PALAKKAD, KERALA, 29/04/2015: A view of the 119-year-old Vadakkath Tharavadu at Anakkara, a Nalukettu of architectural beauty, near Kootanad, in Palakkad district has given birth to generations of illustrious men and women like Captain Lakshmi (Dr. Lakshmi Sehgal). Its branches have spread across the world, having produced great freedom fighters, political leaders, artistes of the high order, scientists and legal LUMINARIES. The tiled house built in traditional Kerala style is 15 km from Kuttipuram. It was constructed in 1896 by P. Govinda Menon and his brother P. Theyunni Menon. The Tharavadu celebrated its centenary in 1996 with a family get-together (Kudumba Yogam) in which some of its illustrious sons and daughters had assembled. G. Susheela, herself a freedom fighter, is the lone member living in this illustrious Tharavad now. She is trying to maintain the house with the support of other family members. Since this Tharavadu has a long tradition and history, the family members want to preserve this architecture marvel. Though the illustrious members of the Tharavadu are spread over different parts of the world, they keep coming whenever they find time. Photo: K. K. Mustafah