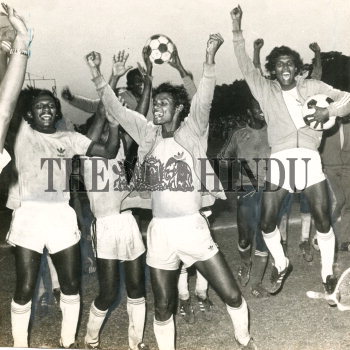 Caption : The toss to decide the holder of Vittal Trophy, for the first six months, created confusion after the final of Vittal Trophy Football Championship in Madras, as both players of Hyderabad and Sri Lankan teams jumped in joy to proclaim that they had won the toss. The issue was decided in favour of the Sri Lankan team. (Published in The Sportstar on August 25, 1979). PHOTO: THE HINDU ARCHIVES