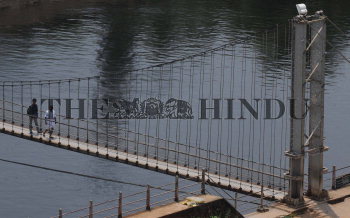 Caption : PALAKKAD, KERALA, 19/03/2015: Tourists at hanging bridge at the Malampuzha dam garden near Palakkad in Kerala. Malampuzha garden, the largest domestic tourism spot in the entire state, is completing 60th year of existence this year. Part of the childhood fantasies of almost all Malayalees, it and the irrigation dam are still attracting huge number of visitors. The jubilee year promises an image makeover for the garden. The idea of building a dam came about in order to bring more life to the agricultural sector of Palakkad. The Madras government decided to build a dam in 1914. Till 1944, the functioning of this plan was moving very slowly. The committee that was formed after the Second World War decided to start off the functioning of this plan in a full-fledged manner. On March 27, 1949, Bhakthavalsalam, the Minister for Water Resources, laid the first stone for starting off the project. The 6066 feet tall dam was built partially with huge rocks and partially with mud. 45,000 tonnes cement was used for the construction of the dam. 5.80 crores were spent for building this dam. The construction of the dam was interrupted in between due to heavy rains and floods. The construction works began in September when the monsoons receded. On November 28, 1955, construction of the dam was completed. Hundreds of fishermen too, depend on this dam for their living. Irrigation, drinking water facilities, fishing, producing electricity, tourism are the different departments in which Malampuzha dam is diversified. Irrigation is done in Palakkad on over nearly a lakh acre of land, in different places. The project is situated in about 57 square miles of land and has a capacity of 8000 million cubic metres. It can hold water up to 125 ft above mean sea level. Built across the Bharathapuzha, the dam also sees the confluence of Myladipuzha, Aanakkal thodu, Kallanpuzha, Cherupuzha, Onnampuzha and Mayapparapuzha. Photo: K. K. Mustafah