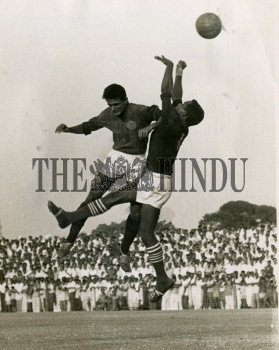 Caption : Chatterjee (Mohun Bagan) and S. Rao (HOWRAH Union) fight for the ball in the air during the football match between Mohun Bagan and HOWRAH Union at Calcutta on May 24, 1966. Mohun Bagan won 4-1. (Published in Sport And Pastime on June 18, 1966) PHOTO: THE HINDU ARCHIVES