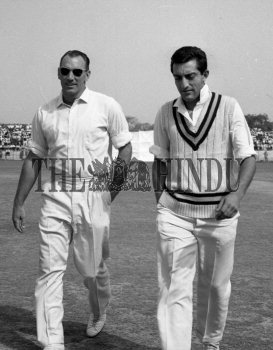 Caption : Nawab of Pataudi (right), captain of the Indian cricket team, and his New Zealand counterpart J.R. Reid returning after the TOSS before the start of the fourth and final cricket Test match between India and New Zealand at the Feroze Shah Kotla ground in New Delhi on March 19, 1965. PHOTO: THE HINDU ARCHIVES