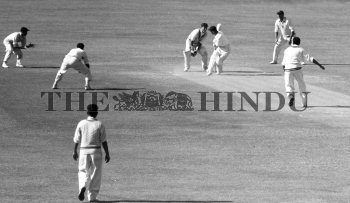 Caption : England's P.E. Richardson plays a sweep shot off S.A. Durrani on the fourth day of the England SECOND innings in the SECOND cricket Test match between India and England at Green Park Ground in Kanpur on December 05, 1961. PHOTO: THE HINDU ARCHIVES