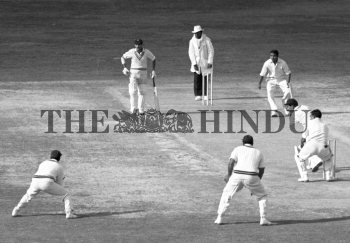 Caption : Indian batsman R.F. Surti drives a ball as non-striker N.J. Contractor looks on during the fifth cricket Test match between India and Pakistan at Feroz Shah Kotla in Delhi on February 08, 1961. PHOTO: THE HINDU ARCHIVES