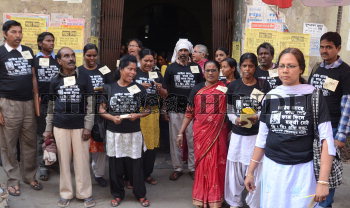 PROTESTING AGAINST THE CURTAILMENT OF MGNREGA

Caption : KOLKATA, WEST BENGAL, 04/02/2015: Activists protesting against the curtailment of MGNREGA outside the State Panchayat Department office in Kolkata on February 04, 2015. The man days generated under NREGA has dropped considerably in the State under the central scheme. Those protesting are members of Paschim Banga Khej Majoor Samity. Photo: Sushanta Patronobish