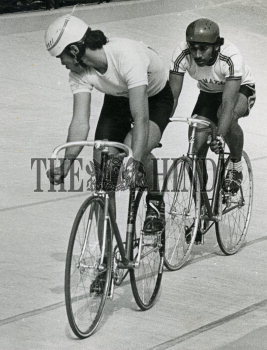 Caption : Kendal TURNER of Andhra Pradesh, who won the gold and Prasana Krishna of Karnataka, who won the silver in 1000m sprint for boys under-18 years, seen in action during the 23rd National Junior Cycling Championship held in Delhi on December 30, 1990. PHOTO: THE HINDU ARCHIVES