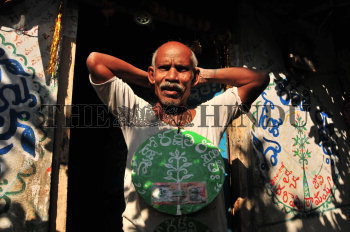 Caption : HYDERABAD, TELANGANA, 29-12-2014: He belongs to a different breed! Well, this septugenarian, Dr. Vanajeevi Ramaiah from Reddypalle village in Khammam district of Telangana State, who developed a fascination for planting saplings ever since he was in his fifth standard in 1960, has scripted what is arguably one of the finest chapters in how one individual can defy all odds and change the topography of the vicinity itself by his 'Mission Afforestation'. For someone who since childhood evinced more interest in planting saplings than spending time in a play-field, he has scaled heights which would have been the realms of imagination for many. Taking a cue from the famous writer Gurajada Apparao's words suggesting that it is better to forget about our self-interests and think of the others, Dr. Ramaiah is now a  house-hold name in the afforestation schemes. Not just in terms of many awards including Doctorate by the Universal Green Peace international organisation or mementoes from the former Prime Minister P. V. Narasimha Rao, but also the respect he earned with his remarkable journey in a different world. "It is sad that the Central Government which is spending crores of rupees for so many welfare programmes doesn't even think of allocating even one=fourth of that budget for planting trees. if this were to be done long back, the entire country would have presented a different look with all the trees. I feel that in each mandal the government should make it mandatory to plant saplings in at least 2,000 hectares of land," he argues. The beginning of a long journey: Well, the 70-year-old selfless Dr. Vanajeevi Ramaiah, widely acknowledged for his mission to plant sapplings, begins his daily routine to popularise his concept in Reddypalle village of Khammam district in Telangana State. Photo: K. Ramesh Babu