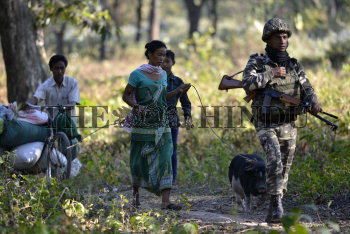 Caption : KOKRAJHAR, ASSAM, 28/12/2014: Bodo villagers are being escorted by the Sashastra Sema Bal (SSB) personal as the move to a relief camp along with her belongings along the Indo-Bhutan international border in Saralpara in violence affected Kokrajhar district of Assam on December 28, 2014. SSB and Indian army has intensified counter INSURGENCY operation against the National Democratic from of Bodoland (Songbijit) militants along the Indo-Bhutan border after the killing of large number of innocent villagers by the militants outfit. More than 1.7 lakh violence affected Bodo and Adivasi community people have taken shelter in relief camps in Kokrajhar district alone. Photo: Ritu Raj Konwar