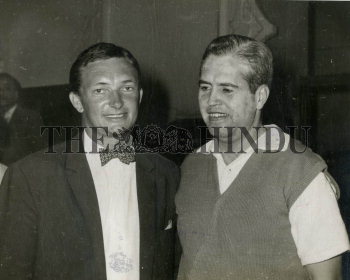 Caption : The Australian cricket team captain RICHIE BENAUD snapped with the world champion Wilson Jones. The Australian cricketers during their final test, took time off to watch the National Billiards and Snooker Championships held at Calcutta. (Published in Sport and Pastime on February 13, 1960). PHOTO: THE HINDU ARCHIVES