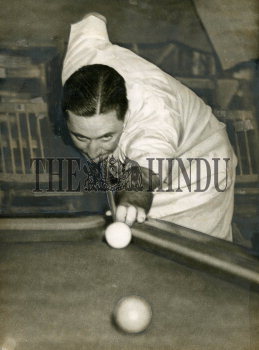 Caption : In one of the sequence pictures, Robert Marshall, twice winner of the Empire Amateur Championship, who is on an India tour demonstrates a few techniques in billiards. The red ball is on the spot which incidentally should be 12-3/4" out from the face of the top cushion. The cue ball is on the edge of either of the top pockets. To play a natural half-ball shot is to cue up on the white for a true ball with no side. To hit the red ball the cue about to strike the cue ball should be pointed in a line with the very edge (in this case the edge facing the top cushion) of the red. In this manner, the extreme edge of the white passes, in theory, through the centre of the red or, in other words, half the white hits half the red. This is why it is termed a half-ball shot or a natural angle. The main points to remember here are to top the cue ball with no side and to aim at the edge of the red. (Published in Sport and Pastime on April 2, 1949). PHOTO: THE HINDU ARCHIVES