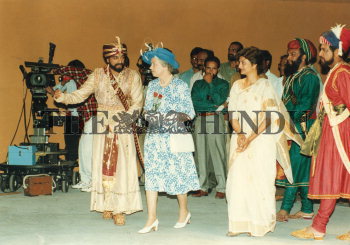 Caption : On the sets of the Tamil film Marudanayagam, its director and actor Kamal Haasan (left) explains a point to Queen Elizabeth. Also seen are (from right): Om Puri, Naaser, costume designer and Kamal Haasan's wife Sarika and art director Sabu Cyril at the M.G.R. Film City in Madras on October 16, 1997. (Published in The Hindu on October 17, 1997 and Published in Front Line on November 01, 1997) PHOTO: THE HINDU ARCHIVES