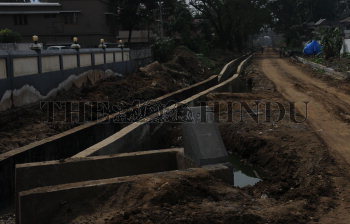 Caption : PALAKKAD, KERALA, 07/12/2014: Though railway authorities claim that trains would chug along the PALAKKAD-Pollachi route by March 2015, gauge conversion works are progressing at a snail's pace in areas close to PALAKKAD Town. The metre gauge route connecting North Kerala with Palani, Madurai, Erwadi and Rameswaram in Southern Tamil Nadu was closed down for gauge conversion seven years ago. A scene from PALAKKAD town on December 07, 2014. Photo: K. K. Mustafah