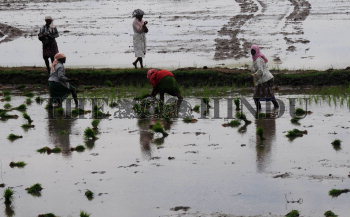 Caption : PALAKKAD, KERALA, 04/12/2014: Farm workers engaged in transplanting paddy saplings at field near Shoranur near Palakkad. Palakkad district can easily boast of being the traditional rice bowl of Kerala, having the largest acreage under paddy cultivation. But recently, there has been an alarming trend of rice growers gradually moving to cultivation of other crops that promise instant returns. According to statistics with the Agriculture Department, the acreage under paddy has fallen to 87,000 hectares in the district. Though paddy production has remained comparatively steady in the last five years at 4.5 lakh tonnes a year, large-scale diversion of paddy fields has become a matter of concern. Data sources reveal that the district is losing about 200 acres of rice field every year to ginger and other short-term crops and also for construction purposes. The countries acreage under rice has exceeded last year’s level during the current kharif sowing season with the revival of the South-West monsoon. Rice has been sown on over 373.6 lh (373.15 lh). According to data from the Agriculture Ministry, overall sowing of kharif crops stood at 1,015.18 lakh hectares (lh) as on September 19.During the same period a year ago, sowing was 1,040.85 lh, down 2.5 per cent. Photo: K. K. Mustafah