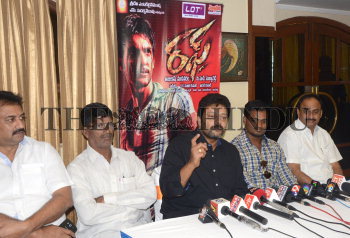 Caption : VISAKHAPATNAM, ANDHRA PRADESH, 27-11-2014: Actor Sai Kumar and distributors at a programme organised to give details to the media about the Telugu film 'Rough' in Visakhapatnam on Thursday, November 27, 2014. The film in which his son Aadi is the film's hero is slated for release all over the State on Friday, November 27, 2014. Photo: C.V. Subrahmanyam