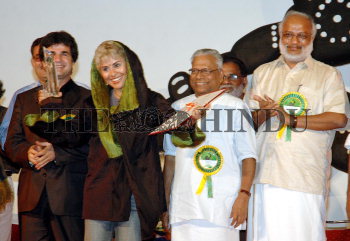 Caption : THIRUVANANTHAPURAM, 14/12/2007: Director of the Iranian film `10+4' Mania AKBAR who won the `Suvarna Chakoram' award for the best film of the competition section, at the 12th International Film Festival of Kerala (IFFK) which concluded in Thiruvananthapuram on December 14, 2007. The Jury chairman Jafar Pahani, Chief Minister V.S. Achuthanandan who presented the award and the Education and Cultural Affairs Minister M.A. Baby are also seen. Photo: S. Gopakumar