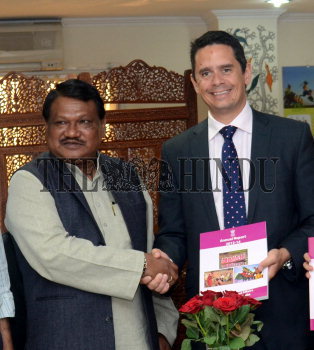 Caption : NEW DELHI, 27/10/2014: Minister of Tribal Affairs, Jual Oram presenting the Annual report to the Australian Shadow Minister for Aboriginal Affairs, Benjamin Sana Wyatt during their meeting to discuss some of Australia's agendas in uplifting the economic and social conditions of tribal people, in New Delhi on October 27, 2014. Photo: Rajeev Bhatt