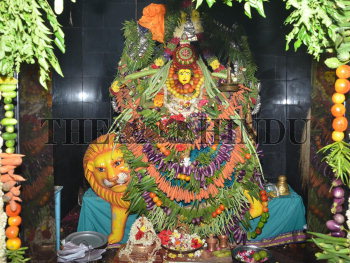 Caption : KHAMMAM, TELANGANA, 30/09/2014: Sakambari Alankaram of Goddess Kanaka Durga, Sri Kanaka Durga Ammavaru’ of Sri Vasavi Kanyaka Parameswari Temple adorned in Sakambari Alankaram on Tuesday, September 30, 2014. Thousands of devotees throng the temple to worship the deities. on the occasion of Dasara celebrations. Sakambari Alankaram is performed in the Celebrations at famous Sri Vasavi Kanyaka Parameswari Temple. Goddess Shakambari or Shakumbhari Devi is the bearer of greens or the Goddess who feeds the hungry with vegetables. In the Sakambari Alankaram the murti Goddess Kanaka Durga is adorned with bangles and vegetables. Legend has it that Goddess Shakambari Devi is an incarnation of Goddess Durga. She appeared as Shakambari Devi after a dry period of hundred years. She brought forth from her body fruits, flowers, vegetables and herbs to suffice the hunger of the people. This legend is mentioned in Devi Mahatmya. Photo: GN. Rao