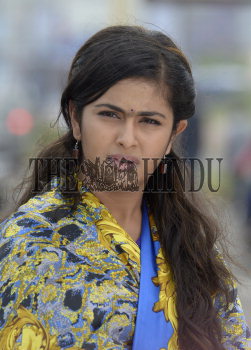 Caption : VISAKHAPATNAM, 04/09/2014: Television actor Avika Gor, who will be seen in her second TELUGU film 'Lakshmi Raave Maa Intiki', during the shoot in Visakhapatnam on Thursday September 04, 2014. Photo: K.R. Deepak