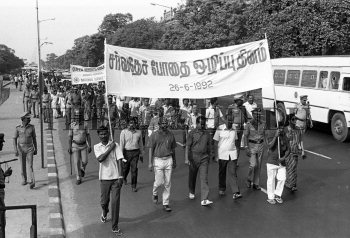 Caption : A rally of students was flagged off by Mr. K. Malaichamy, Home Secretary. Carrying placards and banners, the students marched from Gandhi Statue to Ezhilagam on the Marina on June 26, 1992. Mrs. Jayashree Balachander, Madras District Collector, Mr. A.X. Alexander, (IG Prohibition), Mr. K.A. Mathew and Mr. M.P.Vijayakumar, Commisisoner and Joint Commisisoner, (Prohibition and Excise) and Mr. R. Rajagopalan, Commisisoner of Police, were among those who were present on the occasion. PHOTO: THE HINDU ARCHIVES