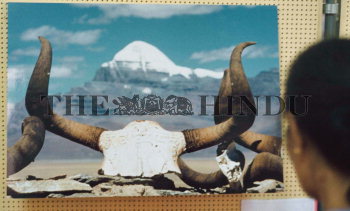 Caption : The images of Tibetan Buddhism captured by German photographer, Bruno Baumann, through his lens is on display in Bangalore on August 18, 2003. Nearly 80 photographs taken by this Munich-based photographer who has travelled extensively in Tibet and the Himalayan region and spent more than three years there, are on display at the Indian Institute of World Culture, Basavanagudi. This exhibition, "Living Tibetan Buddhism: A Photographic Journey", which is part of the Festival of Tibetan Culture organised here by the Tibet House, New Delhi, paint a vivid picture of various practices, monastic tradition, the religious life of laymen, the relationship between monks and lay people, PILGRIMAGES, Tibetan medicine, astrology, and sacred art. One of the striking pictures, of course, is that of the Dalai Lama smiling and peaceful. Photo: K. Bhagya Prakash