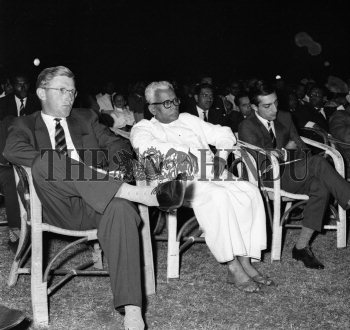 Caption : Members of M.C.C. TEAM and Indian TEAM during a dinner at the Chepauk lawns hosted by The MADRAS CRICKET Association, in MADRAS on January 12, 1964. Picture shows: England TEAM captain M. J.K. Smith, Chief Minister of MADRAS Mr. M. Bhaktavatsalam, and Indian captain Nawab of Pataudi at the function. PHOTO: THE HINDU ARCHIVES