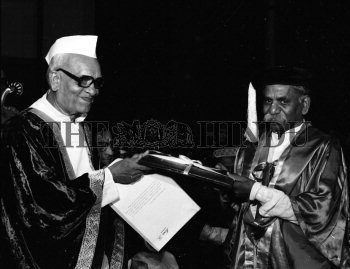 Caption : Mr. M.P. Sivagnanam, Chairman, Legislative Council (right), receiving the honorary degree of D.Litt. from the Chancellor of the Madras University and the Governor, Mr. Prabhudas Patwari, at the University's annual convocation in Madras on September 28, 1979. Mr. N.A. Palkhivala, eminent jurist and former Ambassador to U.S., who delivered the convocation address looks on. PHOTO: THE HINDU ARCHIVES