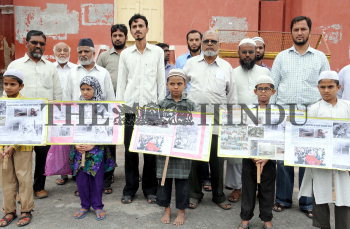 YOUNG CHILDREN ON DEMONSTRATION OUTSIDE THE OFFICE

Caption : RAICHUR, KARNATAKA, 22/07/2014: People during a demonstration outside the office of Deputy Commissioner in Raichur on July 22, 2014 opposing Israel’s aerial bombing on Gaza in Palestine. Photo: Santosh Sagar