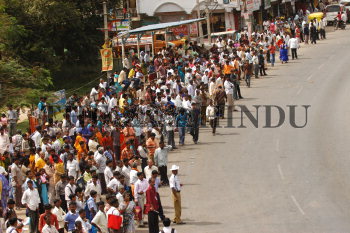 Caption : BANGALORE, 26/11/2007: View of the commuters at the Kengeri bus stand on Bangalore-Mysore state highway road, during the BJP's Jana Jagruthi Yatra (rally) to expose the politics of betrayal of the Janata Dal (S), in Bangalore on November 26, 2007. Photo: K. Murali Kumar