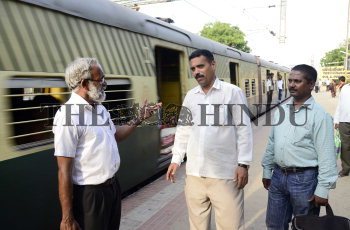 Caption : CHENNAI, 13/06/2014: Three commuters on the Chennai Beach - Arakkonam route took up the public cause of over-crowding in the first class compartment of the suburban trains along the route by pulling the emergency chain in the train last month thereby highlighting the problem of over-crowding in Chennai on June 13, 2014. Photo: R. Ravindran.