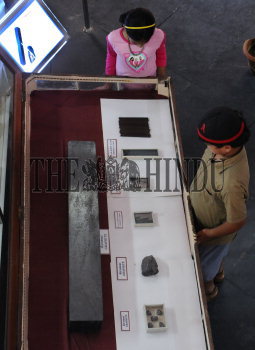 Caption : CHENNAI, 04/06/2014: Children having a look at the Graphite, exhibited as Exhibit of the Month, at GOVERNMENT MUSEUM in Egmore, Chennai on June 04, 2014. Graphite was named from the Greek verb graphein meaning, to write, because it was used in the manfacture of pencils. Photo: R_Ragu