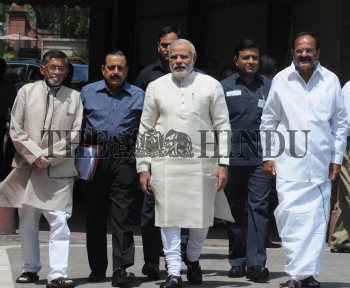 Caption : NEW DELHI, 04/06/2014: Prime Minister, Narendra Modi, along with Union Minister of PARLIAMENTary Affairs, Venkaiah Naidu (extreme right), Minister of State in the Ministry of PARLIAMENT Affairs, Santosh Kumar Gangwar (extreme left) and Minister of State in the Prime Minister's Office, Jitendra Singh (2nd from left), arrive to address the media persons at the PARLIAMENT House on the first day of the first session of 16th Lok Sabha, in New Delhi on June 4, 2014. Photo: Kamal Narang