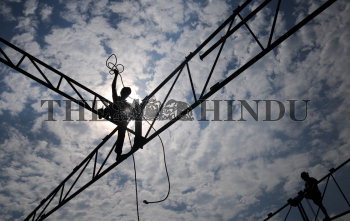 Caption : KOCHI, KERALA, 30/05/2014: Migrant workers sweating it out in a construction site in Kochi, Kerala on May 30, 2014. Kerala is severely threatened by climate change as per an assessment made by the State Action Plan on Climate Change. The projected climate change scenario estimates that the atmospheric temperature across Kerala will rise by 2 degrees Celsius by the year 2050. The minimum surface temperature in the Western Ghats region may rise by 2 to 4.5 degrees Celsius. The number of rainy days is likely to decrease along the entire western coast including the Western Ghats. Also, it is projected that if the sea level rises by one metre, 169 sq km of the coastal region surrounding Kochi would be inundated. Despite the varying climatic conditions, the State is expected to have its annual monsoon beginning from June 05th. Photo: K.K. Mustafah