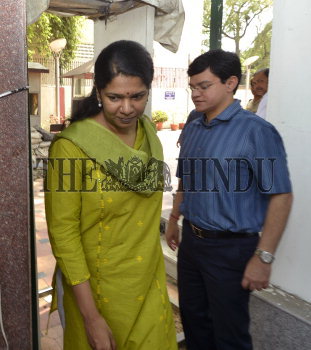 Caption : NEW DELHI, 05/05/2014: DMK MP Kanimozhi, a key accused in the 2G Spectrum Allocation case and Kalaignar TV Managing Director Sharath Kumar, another accused, after appearing before the Special CBI Judge O.P. Saini at the Patiala House Court to record her statement, in New Delhi on May 05, 2014. Photo Rajeev Bhatt