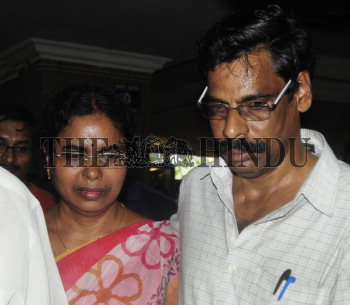 Caption : CHENNAI, 01/05/2014: Parchuri Ramakrishna and Kamakshi, parents of Parchuri Swathi, who was killed when two low-intensity bombs exploded in the Bangalore-Guwahati Express at Chennai Central Railway Station, arriving at Rajiv Gandhi Government General Hospital in Chennai on May 01, 2014. Photo: B. Jothi Ramalingam