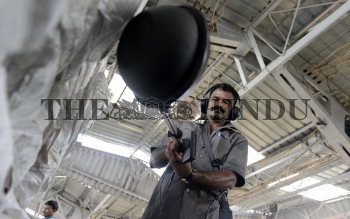 Caption : CHENNAI, 01/05/2014: Bomb squad personnel checking the baggages at Chennai Central Railway Station, where twin blasts occurred in the Bangalore-Guwahati Express on Thursday. The blasts occurred in two coaches just as the train was approaching the city's Central Station. A total of fourteen people were injured, two of them seriously, in addition to a dead passenger. Photo: S_R_Raghunathan