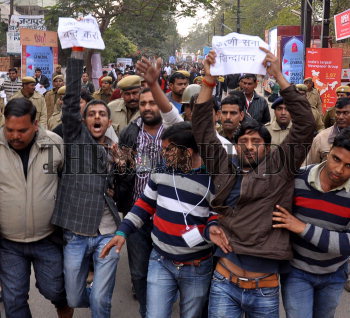 Caption : JAIPUR, RAJASTHAN, 20/01/2014: Members of Rajput Karni Sena barged into producer Ekta Kapoor's session and shouted slogans against her. The protestors from the outfit were agitated with the portrayal of Rajputs in a television serial 'Jodha AKBAR' at the Jaipur Literature Festival on January 20, 2014. Photo: Rohit Jain Paras