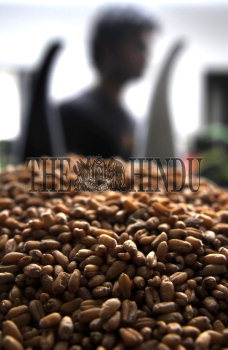 Caption : KERALA, KOCHI, 14/10/2013. Wheat kept for sale at a retail outlet in Kochi on October 14, 2013. Wheat and wheat flour play an important role in the formulation of India?s food economy. The country is today the second largest wheat producer in the world. Wheat cultivation in India is mainly centred in the northern region, especially the northern states of Punjab and Haryana plains. Global demand for India?s wheat show a rising trend, especially the superior variety Durum wheat. The country has exported 6496.20 thousand MT of wheat to the world for the worth of Rs.10528.53 crores during the year of 2012-13, according to Agricultural and Processed Food products Export Development Authority (APEDA). Photo: K. K. Mustafah