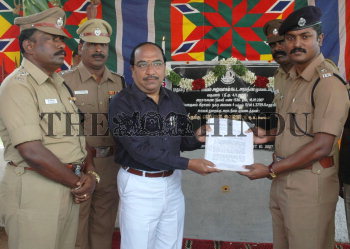 Caption : MADURAI, 17/10/2007: Collector S.S. Jawahar handing over the document of a site, where construction of the District Police Office is planned to the SP, T.S. Anbu, in Madurai on October 17, 2007. Photo: G. Moorthy