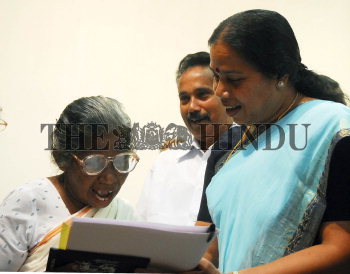 Caption : THIRUVANANTHAPURAM,05/10/2007: Health Minister P.K.Sreemathy with an elderly women whom the minister presented a spectacle at the inauguration of one day workshop on Solving the problems of the Elderly in Thiruvananthapuram on October 05, 2007. Photo: S. Mahinsha