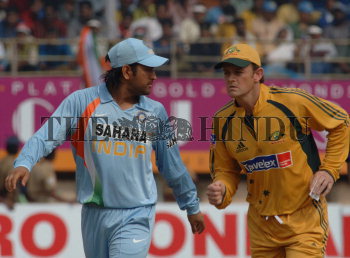 Caption : KOCHI, 02/10/2007: Indian skipper M.S. Dhoni (left), who won the toss and elected to field, and his Australian counterpart Adam Gilchrist return after the toss in the second one day international cricket match at the Jawaharlal Nehru Stadium in Kochi on October 02, 2007. Photo: V. Ganesan