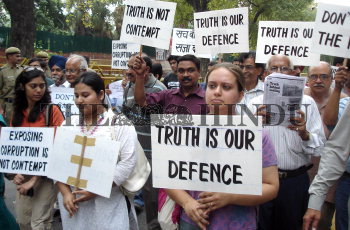 Caption : NEW DELHI, 28/09/2007:JOURNALIST's from various organisation's taking out a protest march against the Court verdict on the JOURNALIST's of Mid Day, in New Delhi on September 28, 2007. Photo: S. Subramanium